Magic can be one of the most amazing things for kids to see, but magic tricks for kids put the magical power into their own hands. And when kids transforms themselves into magicians, their excitement can grow to even greater heights.

Helping Kids Live Out Their Dream of Becoming Magicians

Sure, you can amaze your child by showing him or her with magic for kids or with a whole and fabulous kids magic party, but you will probably find that your child will be much happier with the ability to astound his or her friends with kids magic tricks that they can do all on their OWN.

The Best Thing about These Magic Tricks:
- They Are all as Impressive to See as They Are Easy to Do

These easy magic tricks for kids are simple enough that they can be learned quite quickly.

On this page you will find all kinds of awesome free kids magic tricks, including some nifty math magic, a magic trick for child or two, and anything your child wants to become a magician.


The First Law of Magic 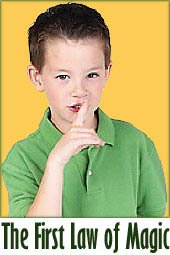 When it comes to teaching your kids magic, and your child is actually really serious about being a magician remember to teach them the first law of magic:

A magician never reveals his or her secrets!

Knowing kids, it's going to be very hard for them to keep quiet when they do a magic trick for their friends. They will probably get so excited about doing a trick and fooling their friends that it can be difficult for them to not let their friends in on the close secret. :-)

The Second Law of Magic 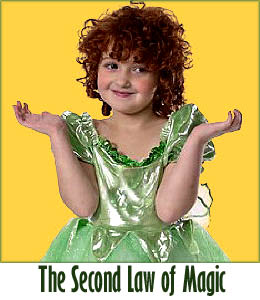 Repetition is the law of memory, but repeating an action helps your child to get the action right.

Just like your child has to learn to tie their shoelaces, ride a bike, or put on their backpack over and over until they get it right, so too they have to perform each of the magic tricks over and over if they want to get the hang of the motions.

It will always take a lot of practice to get the trick right and looking good, but it is well worth it for them to be able to pull a slick trick off without fumbling or making a mistake.

So the cliché really does stick: Practice makes magical master! :-)

Many kids love to perform magic tricks in their bedroom or with their siblings, but when it comes time to do their trick at a child magic show, they may end up fumbling or freezing because they are nervous.

However, if they have practiced their magic tricks over and over, they won't even have to think about it because their brains have already gotten so used to moving their hands and fingers through the motions that it won't be a problem.

So repetition can be boring but they'll know it'll be worth it, when they can pull off the trick flawlessly. 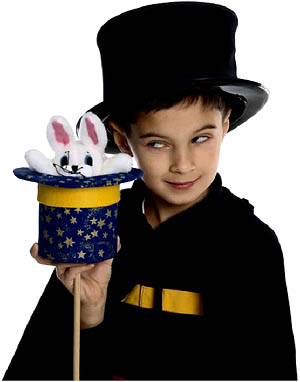 If you want to teach your child or children some fun and easy magic tricks and preparing them to stage a child magic show, here are some good things to keep in mind:

If you can help your child and follow the tips above, you can be certain that your child will become a great magician and go on to impress their friends and family with their amazing magic tricks.

So, let's get down to a few simple magic tricks.

Remember: keep the tricks for kids simple and it will make it easier for them to learn.

These kids magic tricks below are all quite easy to learn, and your child is sure to impress his or her friends once a trick is properly learned.

This simple magic trick for kids is so easy that you might feel silly once you get it:

Sounds easy, but such magic tricks for kids take a lot of practice to grab the rubber band in the middle while appearing to grab its ends.

As this instruction can be quite difficult to understand properly, here is a video demonstration of this free magic trick for kids.


This is a terribly simple trick, and it can be fun for your child to learn:

The reason this works is that putting the paper clip on the back of the middle card (the queen) will make the clip appear to be in a completely different place when you turn the cards over (it will be on the other side of the card and thus appear to be on the front of another card).

For this kind of easy magic trick, all you really need is a pencil and a bit of practice:

It doesn't take very fast shaking, but practice getting the speed just right in order to make the pencil appear to bend as you bounce it with a loose grip.

The necklace trick will require more practice, but it's quite simple when you think about it:

The secret of this trick is the knot that you used in the center bead. It will pull loose and let the beads slip right off the string if you get it right.

The trick takes practice to get it right, but it's a good one for amateur magicians:

This magic trick for kids is really easy, but you will need to practice it a bit to get the trick down just right and make it fluid.

Here is a video demonstration of this magic trick:

This is a nifty magic trick for kids that will amaze your child's friends, but it may be harder to pull off than you might expect:

Your child will have to practice this one a lot in order to get it right, as it takes practice to move the hand gently while making it appear that the ring is levitating.

You can help your child astound his or her friends with this trick, and it only calls for a simple gimmick that is easy to make:

Getting that grip between index and ring finger right will hold the cards in place, but it will take a bit of practice to make it look natural.

Here is an excellent video tutorial on how to perform this great one of magic tricks for kids.

An illusion is easy to do, but it will take a good deal of practice to get it just right:

It will take work to get this trick right, as you will have to slide it into the ring on the back of your hand. Totally worth it to see the looks of amazement on your child's friends' faces as they see him or her make a toothpick disappear.

An easy card trick for kids, but will need hours of repeating to make it look natural:

If you can get this trick right, you can make it look like the card is rising all on its own, but it will be a bit tricky to get it right.

All of the tricks above are guaranteed to provide hours of fun for your child and amaze your child's friends!

If your child can get them down right, they will be able to pull off the tricks without a hitch :-)

Fun Games and Activities for Kids

Wonderful Arts and Crafts for Kids

Back to the top of this page about 9 Fun and Easy Magic Tricks for Kids: Simple Step-by-Step Instructions for Kids Magic Tricks