This page about infant attachment styles will please you if:

Okay, those were heavy-duty information packed lines with lots of 'attachment' stuff.

Actually, the only thing you need to know before we begin is that the academic meaning of 'attachment' is different from the more general and loose use of 'attachment' which we typically read about in popular parenting magazines etc.


Within the psychology of children, infant attachment refers to the type of emotional bond (of which there are four according to attachment theory) an infant develops with his or her primary caregiver (typically the mother).

Back in the 1960s developmental psychologist Mary Ainsworth initiated studies that were to refine psychologist and psychiatrist John Bowlby's initial formulation of attachment theory.

During the babies' first year, Mary Ainsworth and her colleagues visited and observed how the mothers and babies interacted and responded to each other in their everyday lives within their own home in Baltimore. The observation took place for four hours at a time, every three weeks.

When the babies were about one year old, Mary Ainsworth invented the much renowned lab procedure called the Strange Situation Protocol to further explore and assess infant attachment behavior in a 'controlled' stressful situation.

The result of Mary Ainsworth's study has had profound impact on academic thinking and attachment theory.

Despite some pitfalls of generalization (e.g. not taking individual infant temperaments into account) her refinement of attachment theory by carving out attachment styles, has laid the ground for further infant attachment understanding, lab tests and consequent attachment based therapy.


This Is How It Went off
... Quick Facts About the Strange Situation Experiment

What Kind of Attachment Behavior the Researchers Were Looking for ...

What is meant by 'resistance' and 'avoidance' will be explained later when we go through each of the four attachment styles.

What Kinds of Attachments the Researchers Found

A Quick Visual of the Four Attachment Styles 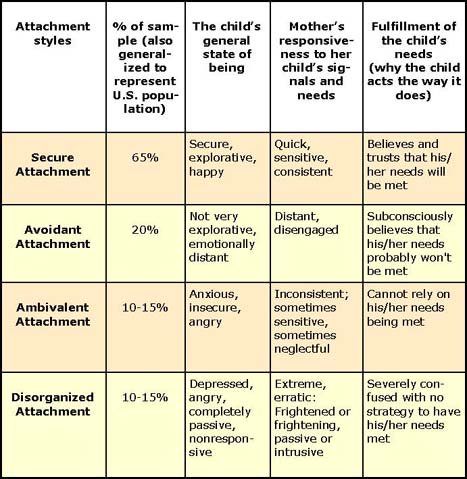 The child's attachment behavior when his or her:

• Mother is present:
o The child demonstrates secure attachment by feeling safe enough to explore the world and engage in play.
o The mother's proximity creates what is called 'secure base' - a space of security from which the child feels to free to explore the world.

• Mother leaves:
o The child protests - e.g. by crying or trying regain closeness.
o The distress is not desperate as the child trusts his or her mother to return.

• Mother returns:
o The child shows signs of being pleased or is quickly comforted if he or she is upset.
o The child will soon re-enter 'secure base' and feel safe enough to play again.

The child's behavior towards the stranger:

• The child will sometimes be comforted by the stranger but clearly prefers his or her mother.

• Responds quickly and consistently to her child's signals of wanting comfort and security.
o The child feels confident that his or her mother will help fulfil any needs when they occur.

Below is a video of a Strange Situation experiment with a securely attached child.

The child's behavior when his or her:

• Mother is present:
o Little or no interest in playful interaction.
o Prefers to play with object rather than people.
o Seems emotionally distant from his or her mother.

• Mother returns:
o The child hardly displays any visible reaction, if any at all.
o The child doesn't really respond to contact attempts.
o The child may even try to avoid contact and ignore his or her mother.

The child's behavior towards the stranger:

• Mostly disengaged; When the child is showing signs of distress, the mother shows little or no response. The mother often aims at making the child independent.
o The child learns that his or her needs will probably not be met and therefore doesn't engage in typical attachment behavior such as crying or reaching out.

Important note for parents: It has been acknowledged that the formulation of these attachment styles does not take babies' personalities into account. A child's distinct personality may make it seem like he or she displays one the insecure attachment styles when in fact they are securely attached.

For instance, some babies are just very calm by nature and are not afraid of strangers or some babies might be more fascinated by objects than social playful interaction.

The child's attachment behavior when his or her:

The child's behavior towards stranger:

• The child is not easily comforted.

• Responses occur on the mother's terms ... in other words; when she feels like it.
• Her availability is therefore inconsistent; She changes between sensitive responsiveness and neglectful responses:
o The child doesn't feel he or she can rely on her to fulfil his or her needs.

Important note for parents: As mentioned earlier, it has been noted that babies' personalities may make it seem like they display insecure attachment styles when in fact they are secure.

For instance, if you have what is called a high need baby you may recognize some of the above reactions.

A high need baby is a very sensitive baby and demands much more attention and physical closeness than 'the typical baby'. They very quickly sense when their mother is about to leave and may be very uncomfortable around strangers.

A high need baby was born that way; it's a part of its personality and it has nothing to do with your parenting skills.

This last one of the four attachment styles is characterized by no consistent attachment strategy and therefore no real way for the child to cope with the given conditions.

The other two insecure attachment styles did provide the child with a coping strategy:

• Avoidant attachment was characterized by the child's emotional disengagement - a defensive strategy to the mother's lack of response; 'Why bother reaching out when nothing happens'!

• Ambivalent attachment was characterized by the child's emotional anxiety in terms of anger - a strategy that focuses on attracting and maintaining the mother's attention; 'If I cling or cry enough maybe I can trust her to respond this time'

But disorganized attachment is different.

For instance, when the mother returns into the play room, the child shows no coherent coping strategy:

o The mother's extreme and erratic behavior makes it difficult for the child to form a coherent coping strategy: A mother is like a mirror to her child. So when a child looks at his mother and sees something incomprehensible, the child has no way on understanding himself or his own behavior.

o These infants are more often maltreated and seen in what is termed 'high risk samples' (e.g. raised in extreme poverty, with alcoholic parents etc.) than 'normal middle-class samples)

The Strange Situation experiment was conducted at what is considered the peak of a child's attachment period. If you want to know how attachment behavior changes throughout the ages and stages of child development you may want to read this article Psychology Attachment Behavior: Find out When to Expect the Constant Clinging or the Letting Go of Mom's Skirt!.

Back to the top of this page about The Four Infant Attachment Styles - Straight to the Point, Quick Understanding!