Attachment Theory is Good Basic Knowledge ... But Misses Out on Individual Infant Temperaments!

When assessing the usefulness of attachment theory with the heart and instinct of a mother on the one hand and the critical mind of an anthropologist on the other ... my opinion is this:

The theory of attachment has interesting and compelling insights into:

... but as is the problem with grand theories (even when supported by a large body of empirical data) ... it may feel like something is missing!

So, if you are reading this page as a dedicated parent trying to get to know more about the psychology of children and the particular attachment bond between your and your child:

I'm not going to say 'don't compare' because we all automatically do it as we all want to fit nicely into the "healthy parenting box" and avoid the "poor parenting box".

But when you read about attachment theory be aware that if your child's behavior pattern fits some of the not-so-attractive-boxes, it may be because of your child's particular personality.

The theory of attachment does not take individual infant temperaments and toddler personalities into account! This objection is also supported by academic criticism of attachment theory.

For instance, your child's particular temperament may indicate an insecure attachment, when in fact your child securely attached.

Bearing this reservation in mind, let's proceed to the main points of attachment theory.

Attachment Theory; It's All About the Bond! 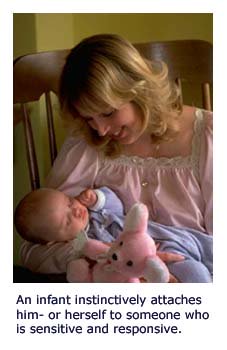 The theory of attachment is concerned with the type of emotional bond that develops between an infant and his or her primary caregiver (typically the mother).

Within this branch of psychology attachment means 'affectional bond'.

The child's tie to his or her mother is called 'attachment' whereas the mother's tie to her child is called 'care-giving bond'.

The psychology of attachment views infants as having an inbuilt 'mechanical' behavior system which makes them automatically seek proximity to or 'attach' themselves to someone who they feel is sensitive and responds sensitively to their attachment attempts - once again, typically the mother.


The Mother Navigates the Infant Through the Stormy Ocean of Emotions

Babies live at the mercy of what they feel. They cannot 'regulate' or control the intensity of their own emotions. This means that they may easily become overwhelmed with fear, desperation or sadness and cannot soothe themselves. 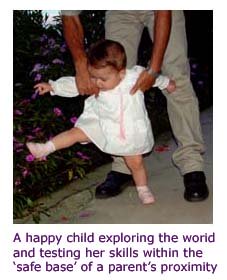 The soothing is the job of the parent (or caregiver). The parent is the child's navigator within the stormy ocean of emotions. And when the child is securely attached to his or her parent, the child will rely on the parent for this kind help.

Being in close proximity of a trusted parent therefore creates what is technically termed a 'secure base'; a safe place from which the child feels secure enough to explore the world.

Even though there has been academic criticism of the theory of attachment over the years on various points (e.g. not taking infant temperament enough into account or not exploring the effect of other very close caregivers such as grandmothers or nannies) attachment theory's focus on the importance and long-term effect of early infant bonding and secure attachment is recognized and used as guiding principles in various therapies.

Attachment Theory's Father, John Bowlby:
- Break the Bond and You Break the Child!

According to the founder of attachment theory, psychologist and psychiatrist John Bowlby, the infant bonding to a primary caregiver is necessary if the child is to both physically survive, obtain existential security and go through healthy psychological development.

According to John Bowlby, if the child's attachment behavior e.g. crying is not sensitively responded to on a consistent and regular basis:

When studying young hospitalized children post World War II, John Bowlby gained insight into what happens when for some reason the attachment bond is periodically severed.

His insights into the psychology of children and child grief were subsequently included in a campaign aimed at changing the strict hospital policies concerning the very limited visits, parents were allowed to pay their hospitalized children.

One of John Bowlby's students, developmental psychologist Mary Ainsworth, made it her quest to further nuance Bowlby's theory.

In the 1960s and 1970s Mary Ainsworth developed a lab method called the Strange Situation Protocol, in which she observed how babies and toddlers reacted to their mother's sudden disappearance and reappearance.

These Strange Situation tests resulted in a theoretical system aimed at identifying various infant attachment styles for children at the age of 11 months to 18 months.

Below, I have sketched the attachment styles very briefly (for a more extensive and visual representation read my article on the four attachment styles, which also includes info about the crucial importance of the mother's type of responsiveness):


• Secure attachment
o The parent child relationship is healthy and secure: The child feels securely attached to his or her mother, which enables the child to feel secure enough to explore the world when being within her proximity.

• Avoidant attachment
o The parent child relationship is 'insecure': The child seems passive and indifferent to his or her mother and tends to treat her and a stranger alike.

• Ambivalent attachment - also known as resistant attachment
o The parenting child relationship is 'insecure': The child is nervous and anxious and is afraid of separation even before it occurs. After separation the child is not comforted easily and may react with anger.

• Later in the 1980's the pattern of disorganized attachment also known as disorientated attachment joined the troop formulated by Mary Main.
o The parenting child relationship is 'insecure': The child is very confused and has no consistent response or coping pattern. Instead there may be strange behavior such as rocking or freezing when the child reunites with his or her mother.

Within the theory of attachment, each of these infant attachment styles is viewed as a direct result of the type of care and responsiveness provided by the primary caregiver ...

... but once again, experts within the field of psychology of children also claim - and mothers of several children know - that infants come out with different personalities from the start; some are very sensitive or anxious, others, very calm.

These temperamental differences may blur the picture somewhat. So if you are reading these pages as part of a personal learning process:

Back to the top of this page about Attachment Theory is Good Basic Knowledge ... But Misses Out on Individual Infant Temperaments!