Secure or Insecure Attachment in Infancy Largely Shapes Who We Are Today!

Our instant interpretation leaves little doubt that secure attachment must be 'better' than insecure.

So far, so good ... but what do those concepts really mean and what is their relevance?

Well, let's start with the relevance of these attachment styles, because it's quite a biggie!

Our Mother's Care Our Two First Years Molds Our Personality
... To a Large Degree 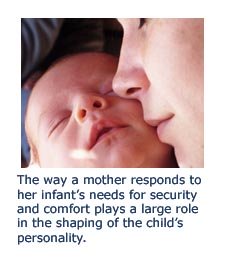 Attachment theory research and many other studies in the developmental psychology of children have shown that our very first close relationship with - or attachment to - our primary caregiver (typically our mother) the first two years of our lives shapes how we:

• View ourselves: our self esteem and self image ...

• See our place in the world and how we think other people see us ...

• Approach problems and cope with challenges, trauma and stress ...

• Deal with strong emotions and impulses ...

Of course, other factors also have a great say: individual temperaments, dispositions or social standing ...

... but numerous studies of the psychology of children show that the 'quality' of infant attachment – the way our mother responded to our need for comfort, security, attention etc. - is paramount in the shaping of our personality and how we deal with relationships.

Yes, it may seem quite overwhelming, and for some, even unfair that our mother's attention, responsiveness and sensitivity have such a strong influence on who we become.


Luckily Love Is a Powerful Healer

For instance, studies of Western families' adoption of Romanian orphans after the fall of Ceausescu demonstrated that proper love and care can heal a lot.

When these kids were in their teens, 70% of them were said to display no severe insecure attachment problems (which does not mean that there weren't insecure  issues of attachment at all).

That is quite remarkable considering that as orphans they probably had little or no opportunity to form this important early attachment.


Attachment Behavior is the First Language of Survival 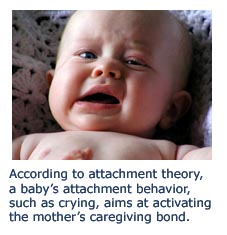 According to attachment theory, infants and young children communicate attachment behavior to get their mother's attention or to be in her proximity.

A mother's consistent response to these signals is necessary for the infant's physical survival and healthy psychological development.

Insecure and secure attachment refer to specific attachment behavior patterns that the infant shows, typically when being under some form of stress.

Secure and Insecure Attachment Were Born in the Lab

In this experiment she put a mother and her toddler in an unfamiliar playroom along with a female stranger.

Then the mother was to leave the room, leaving the child alone with the stranger.

After a few minutes the mother would return and reunite with her child.

These actions allowed Mary Ainsworth to observe separation and reunion behavior which would demonstrate whether a toddler was securely attached or displayed one of three attachment styles characterized by insecurity: avoidant attachment , ambivalent attachment or disorganized attachment.

Fulfilling an Infant's Needs Paves the Way for Secure Attachment

To put it very shortly, secure attachment can be achieved by quickly and consistently responding to your baby's signals and thereby fulfilling his or her needs!

What an infant or child 'needs' from his or her parents are, among other things, attention, physical contact, presence, understanding, acceptance, comfort, a sense of security etc.

Insecure attachment is logically the result of the opposite situation - ignoring or inconsistently fulfilling the infant's needs.

If the basic existential needs are met, the child will be 'free': He or she will feel secure to explore the world, and consequently develop skills and feel the mastery of them, which builds self esteem etc.

The goal of attachment parenting and positive parenting is in fact to create secure attachment between mother or primary caregiver and child.

If the infant's needs are not met, and as a consequence, the child has formed an insecure attachment to his or her primary parent, life will obviously prove more difficult and challenging in several areas (some of these will be listed further down).

Both long term studies of the psychology of children - and a simple use of logic - tell us that secure attachment provides positive effects: A happy child has a high chance of a happy childhood and later, a happy life.

The scientifically documented effects of good, early secure attachment are:

The Challenges of Insecure Attachment

Insecure attachment in infancy doesn't automatically mean that the child doesn't function normally – fortunately many do. However, studies reveal that there are some developmental patterns that seem to be typical of insecurely attached children:

The lack of a 'secure base' in early childhood may mean:

Avoidant Insecure Attachment:
- 'Emotions Don't Work and I Mustn't Rely on Anybody'

The scientifically documented effects of avoidant insecure attachment in infancy are:


Ambivalent Insecure Attachment:
- 'Short Emotional Fuse and Fear of Not Being 'Connected''

The scientifically documented effects of ambivalent insecure attachment in infancy are:


Disorganized Insecure Attachment:
- A Cause For Concern!

The category of disorganized insecure attachment in infancy is still quite new and is still being studied further to learn more about it.

One thing that researchers found was that when compared with the other two attachment categories (the insecure ones), children with disorganized attachment concerns are at more risk of developing aggressive behavior problems, which might already surface at the age of about five.

Please note that the above attachment styles and their outcome show the general picture, which means that individual exceptions are not included.

Therefore, use your critical eye! Don't take anything, any postulate, for granted.

Back to the top of this page about Secure or Insecure Attachment in Infancy Largely Shapes Who We Are Today!