While Amy Chua is a fairly new voice in the field of parenting, her principles seem founded on the well-established but rather 'oldfashioned' authoritarian parenting style.

Her famous book, Battle Hymn of the Tiger Mother, is 256 pages, but actually her ideas can be summed up in 4 simple words:

... Or at least that was how it probably was before her youngest daughter rebelled and Chua had a deep parenting crisis. A crisis which created the foundation for her book.

Her Book Was a Product of a Deep Personal Crisis

This book, Battle Hymn of the Tiger Mother, functioned as personal therapy, was intended as a memoir, but created a HUGE uproar all over the world. Many people were appalled with what they read and reacted with a lot of anger towards Amy.

Although many of the accounts in her book probably leave most western parents  shocked, Chua argues that this is simply the "Chinese way".

While her strict child-rearing techniques would make good old John Watson very proud, there are many critics who claim that some of her actions are too severe - possibly even abusive.

Amy does not claim that she is a parenting expert or that she is flawless. However, she does set a new agenda in the parenting field, which sort of makes her an authority.

How You View Amy Is a Question of Perspective, a Choice

Like with everything, there are many ways to reading a book. And if you're an open-minded kind of person, you'll realize that there are many layers to her book and some of them consist of self irony.

So if you choose to read this book, perhaps decide beforehand what you want with it. Do you want to learn something (because you can learn from everything whether you agree with it or not)? Or do you want to use it as an emotional valve?

Nothing is wrong with any of the options - it's all your choice. Your experience is your decision! :-)


In This Article You'll Get 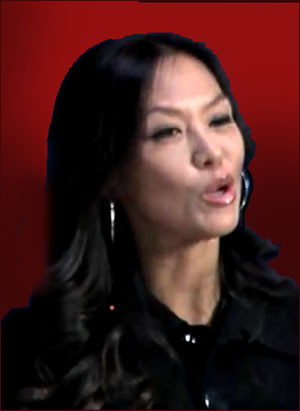 She was raised by Chinese immigrant parents who issued very strict rules and demanded total respect from their children.

High achievement was expected and punishments were given for A minus work or imperfect piano performances.

Despite this rigid parenting approach, Chua claims that she is very close to her parents and greatly appreciates everything they have done to help her succeed.

She believes that her parents' high expectations were the best gift anyone could have given her and a demonstration of their love and faith in her abilities.

When Amy was 8, the family moved from West Lafayette, Indiana to Berkeley, California. After highschool, Chua attended Harvard College, graduating in 1984 with a B.A. in Economics.

She then went on to Harvard Law School, completing her degree in 1987. After graduation, Chua clerked for a judge on the U.S. Court of Appeals for a year and then practiced on Wall Street for four years, working in the field of International Law.

In 1994, she joined the faculty at Duke University and began teaching at Yale Law School in 2001.

She made Time Magazine's list of 100 Most Influential People in the world in 2001, was named A Brave Thinker by Atlantic Monthly, and was acknowledged as one of Foreign Policy's Global Thinkers in 2011.

Chua has appeared on many television programs, written for several newspapers and professional publications, and spoken to government officials and policymakers.

Although she is well-respected in her chosen field, Chua has gained the most popularity due to her recent parenting book. Published in 2011, Battle Hymn of the Tiger Mother has received overwhelming attention. Chua and her husband currently live in New Haven, Connecticut with their two teenage daughters.

As mentioned, Amy Chua's rise to fame in the parenting field has been fairly recent.

Her 2011 book created very strong reactions and her ideas have most people either applauding in agreement or screaming in protest.

However, nothing is black and white and some people also see the book a nuanced, and honest (and sometimes heartbreaking) story of a desperate mother trying to do the right thing, trying to do the best she can.

According to the stories in her book, she would adhere to an authoritarian parenting style.

She claims that she has no intention of telling others how to raise their children and when she talks and writes she does seem very open to the fact that different cultures have different values.

In the following quote, she compares the Chinese style of parenting with the methods used by "western parents".

Nothing is Black or White, and Neither is Chua

I find that she makes quite a good impression as she appears very nuanced and not as 'black and white' as you might come to think from reading the book or excerps from it.

In my view there are many ways to 'prepare' our children to the future, it's all a question of perspective and choices:

Amy Chua wanted to raise her children the same way she was raised, even though her husband didn't always agree with her methods.

Holding true to her Chinese roots, she avoided the "permissive" Western ways and stuck to her strict and controlling parenting plan.

Chua's daughters were never allowed to ...

Although she never really explains why sleepovers and playdates are forbidden, she does say that children are expected to live up to their parent's standards.

Some of the principles of her theory include:

1) Western Parents Have Expectations That Are too Low

Western parents do not ask or expect enough from their children. In Amy's view we need to expect more and, when we do, they will rise to the challenge.

2) Self-esteem Has to Be Earned

Parents should not praise a child for sub-standard work, should not tell a child they are "good" when they are being "bad", and should not appeal to a child's ego with undeserved compliments and flattery.

In other words, self-esteem should come from personal achievements.

3) Children Do not Self-Regulate

Chua claims that if children were allowed to do what they wanted, they would spend all day on Facebook or television. In other words, they would do things that are not good for them. They do not self-regulate.

4) Fun Only Comes When You're Good at Something

Making children do something, even when they don't want to, will benefit them in the future. Eventually, they will thank you.

5) Failure and Punishment Will Make Kids Better and Stronger

As parents, we need to "believe that the child will be strong enough to take the shame and improve from it."

6) Rote, Repetition, Drills, and Practice Is the only Way to Success

And, Chua promotes hours and hours of drills. If a child is not top of their class, they should drill and practice until they are.

Achievement is a reflection of successful parenting and children should work to achieve so that their parents look successful. If they do fail, it is assumed that "parents were not doing their job."

In her article, Why Chinese Mothers Are Superior, published in the Wall Street Journal, Chua makes the following statements:

8) Only Book'ish and Fine Classical Subjects are Related to Success ... or Were ...

Another question raised by Chua's theory is related to the idea of success.

She says that "Chinese parents raise successful kids because the children are totally controlled." But, what defines "success"?

For example, she expects her daughters to achieve As in all subjects except gym and drama. She also says that her children are not allowed to play an instrument other than the piano and violin.

However, later after her parenting crisis, she does admit that parents should support their children's passions, even if it's something as 'creative' as e.g. acting, as long as it's not just a fling.

She says that today, if she feels that, 'this is a true passions for my kid', then she'd  support it.

9) Strict Parenting Is a Demonstration of Love

In the book Chua takes the "tough love" approach - kids will do what they are told, whether they want to or not, because parents always know what is best.

She believes that, one day, children will look back and thank their parents for being strict and non-yielding.

And, she claims that her parenting techniques do not LACK love, but are actually a demonstration of love because they show children that you believe in them and their ability to achieve excellence. By not letting them settle for second best, you are helping them to become all that they were meant to be.

Battle Hymn of the Tiger Mother 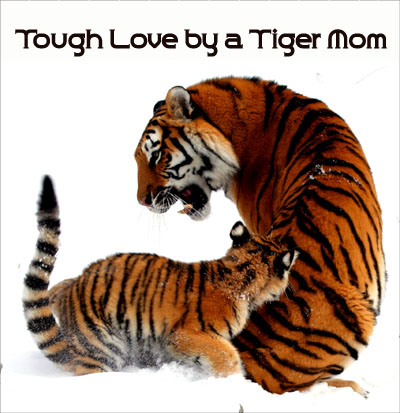 Her most recent book, Battle Hymn of the Tiger Mother, is intended as a memoir of her parenting experience.

Chua fears that the current generation will be "soft and entitled" and that to avoid this we need to make kids work and avoid spoiling them.

Chua admits that her authoritarian parenting style worked well for her oldest daughter, but didn't go quite as smoothly with her younger child.

Throughout the book, she shares several accounts and personal situations and she is brutally honest. She has been taking away meals, locking her children outside in the cold, threatening to give away toys and Christmas gifts, or calling them names such as "lazy", "cowardly", "self-indulgent", "pathetic", and "garbage".

One piano teacher wanted to teach self-expression and improvisation. Chua's response was,

And to Amy Chua's defence she actually never says that Chinese parenting is superior. She believes there are many ways to practice good parenting. 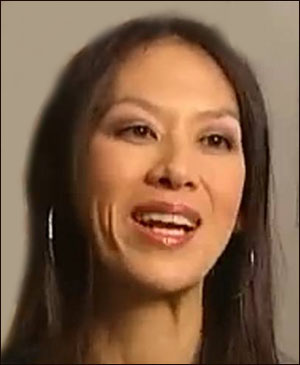 No doubt, it is an eye-opening book, and if you're an open-minded person, you might even learn something valuable.

We can always learn something whether we agree or not. And often what we learn from something, is something unexpected.

Whether or not you agree with Chua in relation to parenting, you've got to admire her honesty. Admitting that what happened behind closed doors were not part of the norm, requires courage.

Also she argues that, essentially, all parents want the same thing - what is best for their children.

We all want to see our children live our their potential and flourish and thrive:

Back to the top of this page about Amy Chua Biography and Theories: Tiger Mother's 12 Parenting Principles