Diana Baumrind's 3 Parenting Styles:
Get a Full Understanding of the 3 Archetypical Parents

In this article on the 3 parenting styles formulated by Diana Baumrind, you'll get:

In her study she and her research team followed more than 100 middle class children of preschool-age. Baumrind's primary research methods were interviews and observation.

The aim of Diana Baumrind's child parent behavior study was to formulate and evaluate the effect of the most typical Western parenting styles.

Diana Baumrind's 3 parenting styles are these:

Her findings were ground breaking at the time and her analytical methods and results have ever since been subject to both academic acclaim and criticism. 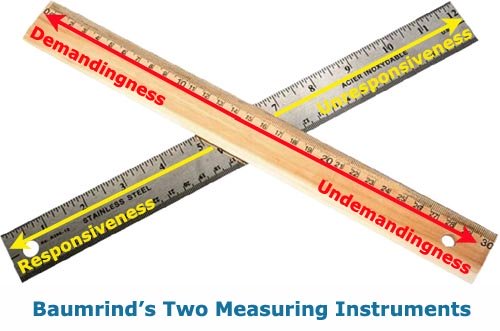 In her study Diana Baumrind used two aspects of parenting that she found so important that all her data was evaluated and the essence of the 3 parenting styles defined in relation to these two elements.

Her two analytical tools for formulating the parenting styles were:

In the words of Diana Baumrind herself, responsiveness describes "the extent to which parents intentionally foster individuality, self-regulation, and self-assertion by being attuned, supportive, and acquiescent to children's special needs and demands" (Baumrind, 1991)

In other words, responsiveness is about how much or how little parents meet and respond to their children's needs!

I relation to demandingness, Diana Baumrind says that it refers to "the claims parents make on children to become integrated into the family whole, by their maturity demands, supervision, disciplinary efforts and willingness to confront the child who disobeys". (Baumrind, 1991).

Another word for demandingness is control. The demandingness continuum (high vs. low) describes the level of behavior control parents exercise on their kids based on their expectations of 'mature' behavior.


The 3 (and 4) Parenting Styles Model 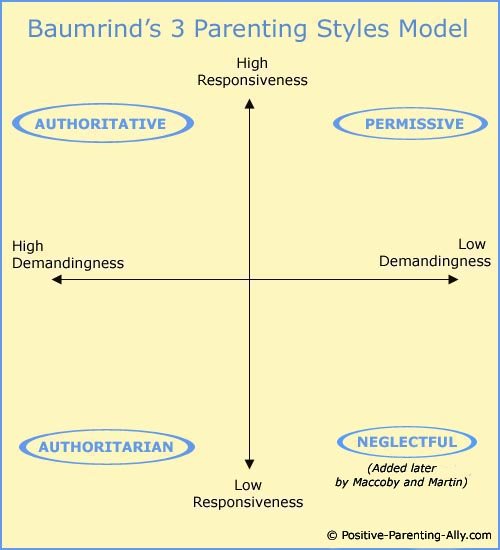 Before describing each of the 3 parenting styles in detail, I will just explain the model I've made above.

The parenting styles model has two axes. Each axis represents one of Baumrind's parenting themes which is 'high' in one end and 'low' in the other. Together these two axes of demandingness and responsiveness create four quadrants where each parenting styles is placed:

An Important Note:
- The Parenting Styles are not "Real"!
They Are Archetypes!

Before you read on about the 3 parenting styles, please do bear in mind that these parenting styles are archetypical. In my opinion they represent 'clean-cut' personalities and behavior patters.

This means that in reality most people don't just fit neatly into one archetype.

Typically people behave according to one primary archetype in most situations and then often have traits from some of the other parenting styles in other situations.

We people are not as 'black and white' as models portray us to be!

In this article I will present you with Diana Baumrind's results.

I don't favor any of them, not even the authoritative parenting style. My personal approach is different from all of them.

But I will not be commenting on or evaluating her research results right here. However, if you're academically curious or just feel:

I recommend you go on reading this reflective article on parenting styles .

In that article of mine you'll get to:

For now, let's see what these 3 parenting styles are about. 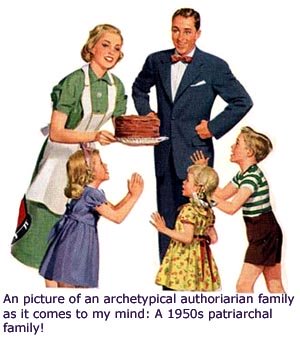 
To get a mental image of the archetypical authoritarian family, try picturing a typical 1950s American family: There are traditional family values (patriarchal), set family roles, firm rules and everybody behaves in a predictable, orderly fashion.


Kids' social behavior and inner being (the effect of the authoritarian parenting style): 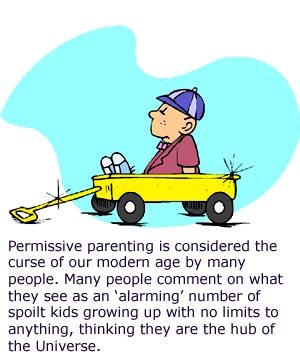 
The archetypical image of permissive parenting, also called indulgent parenting, is that of a conflict scared parent desperately trying to maintain a 'friendship' with his or her bossy child rather than being 'a parent'.

The child behaves in a 'unruly' fashion, oblivious of other people's needs and is only interested in having fun. Many people believe that permissive parenting is a curse of the modern age: The child is seen as being too much in the centre!


Use of reasoning, manipulation and / or bribes as means to achieve some level of control.


Kids' social behavior and inner being (the effect of the permissive parenting style):

Even though Baumrind's research is 50 years old, many people (not me), child experts included, see the authoritative parenting styles as the 'ideal' parenting style.


Control is achieved via the use of firm but fair reasoning as a base for 'moderately' open negotiations along with positive reinforcement.


Kids' social behavior and inner being (the effect of the authoritative parenting style):


I think The Cosby Show represent an archetypical authoritative family: Control / demandingness is high and responsiveness / warmth is high as well.

The uninvolved parents fulfill their children's physical needs but are otherwise distant, detached, and disengaged.

The uninvolved parents may lead 'full' lives but their life is emotionally separate from that of their children. There are few demands and limits and communication and responsiveness is low.

The children of neglectful parents have low self esteem (no attention makes them feel unimportant) and they are less socially competent than children of raised with the other parenting styles.

Children and adolescents whose parents are uninvolved perform most poorly in all domains.

A note on the origin of this fourth parenting style:
In my original article I wrote that the neglectful / uninvolved parenting style was formulated by Maccoby and Martin when they in 1983 expanded upon Baumrind's work. If you do a quick search online, you'll find plenty of articles concluding the same.

However, I was contacted by Diana Baumrind's daughter, Nikki Baumrind, who told me that there was an "inaccuracy" in my articles regarding that fourth dimension. Nikki Baumrind wrote to me that:

When I further researched this issue, I found that in 1971 Baumrind published a study where she grouped families into eight parenting styles:

There's no doubt that Diana Baumrind's insights has contributed tremendously to the academic field of child parent behavior research.

However, the study is more than 50 years and I think it does show.

Among other things, I think her academic and analytical point of departure - the presumption of high control being an important definitive of 'good' parenting - is a direct reflection of the early 1960s societal norms and mindset.

If you want more 'meta thinking' and want to see my analytical perspectives on her 3 parenting styles, you're welcome to dive into this this article

Note: This article has been updated for accuracy in January 2019.

Back to the top of this page about Diana Baumrind's 3 Parenting Styles: Get a Full Understanding of the 3 Archetypical Parents