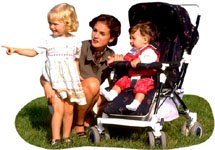 In this parenting article on the authoritative parenting style you'll:

• Get an interesting outline of the theoretical paradigm background paving the way for the 'birth' of Diana Baumrind's authoritative style of parenting!

• Be presented with a visual model containing the main characteristics of the authoritative style of parenting.

• Get a better understanding of parenting control via my discussion of Diana Baumrind's beloved 'firm control' issue!

• Be introduced to other academics' view on authoritative control - unlike Baumrind, they think it might actually do more bad than good!

• Read about my own view on high control in parenting which is I find is closely related to a person's level of consciousness!

The Authoritative Parenting Style:
- Striking a Course Between Pre-War Behaviorism and Post-War Freudianism

Like all other social scientists development psychologist Diana Baumrind is a child or her time.

When scientists, particularly those studying social interaction etc., write up their analysis and research results, it is nearly impossible for them not to be culturally colored as well as personally biased.

Diana Baumrind’s groundbreaking research results on parenting styles reflect some relatively big cultural parenting paradigm changes that occurred during the 1940s and 1950s as well as showing her own predisposition of favoring the authoritative parenting style.

This is quite natural; whatever we write has to go through our own cultural and subjective filter.

Diana Baumrind conducted her child rearing studies some 50 years ago in the 1960s.

Or in other words, with the definition of the authoritative parenting style Baumrind tries to theoretically strike a balance between satisfying social obligations towards family and society (behavioral) and individual child needs (Freudian).

In the next quote by Diana Baumrind, you can clearly see how she oscillates backwards and forwards on the social and individual continuum trying to weave in both perspectives in her authoritative parenting definition:

Everything that you read in the below model are points that I have read or deduced from Diana Baumrind’s work: Effects of Authoritative Parental Control on Child Behavior,1966.

Below I have reworked Diana Baumrind's results into two columns that will show you how she tries to strike a relatively even course between social demands and individual needs.

In my view, she tends to favor social demands above individual needs, but that's only my personal opinion. Fortunately the world is open for you to judge for yourself.

What Exactly is 'High Control' in Authoritative Parenting?

According to Diana Baumrind it's very important for a parent to be what she calls an "authority".

And an authority is characterized by setting high demands via high control.

Despite various criticism of Diana Baumrind's strong emphasis on high control in parenting throughout the years, Diana Baumrind still claims that firm behavioral control is necessary in order to paving the way for healthy child development.

But what exactly does Diana Baumrind mean by her beloved idea of control?

Well, Baumrind goes at great length to distinguish between what she calls: 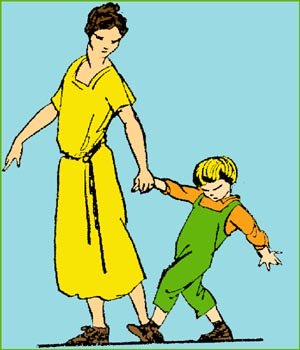 These two definitions of control: rational vs. inhibiting (that Diana Baumrind borrowed from Pikas, 1961), she uses to distinguish between authoritative control and authoritarian control.

In other words, Diana Baumrind says that what makes the difference between these two parenting styles is not the level of control (both are high) but the manner by which it is executed:

The parents' general emotional attitude towards their children.

In her work Baumrind carefully suggests that high control and "mild punishment" ought not to have any detrimental effects as long as it is done by a warm and loving caregiver.

Whereas the high control and punishment in the authoritarian parenting style (repressive, cold and insensitive) is much more problematic, she claims.

Another way to look at parental control is suggested by Steinberg 1989. 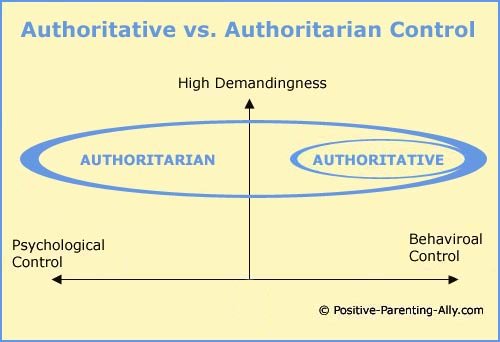 Not All Academics Agree with Diana Baumrind!

Among child parenting experts there seems to be a general agreement that authoritative parenting is the ideal form of parenting, at least in the Western world.

However, despite this widespread celebration of the authoritative style of parenting, there are a few academics who refreshingly challenge Diana Baumrind's insistence of high control as being ideal in parenting:


Is all this High Control Really Necessary?
- Harmonious Parents Don't Seem to Need It!

One of the most interesting things in social studies is when things don't seem to fit: When data doesn't seem to fit the scientist's model.

Berstein et al. (2000) interestingly points out that in Baumrind's study there were a small group of parents, so called harmonious or democratic parents, who apparently had raised 'well-adjusted' and happy children without using the means of high control.

Now according to the Baumrind's logic, this shouldn't be possible.

According to Stephen Greenspan, Diana Baumrind explained the harmonious parenting 'anomaly' on the rather vague grounds that these children must have been raised authoritatively when they were smaller. 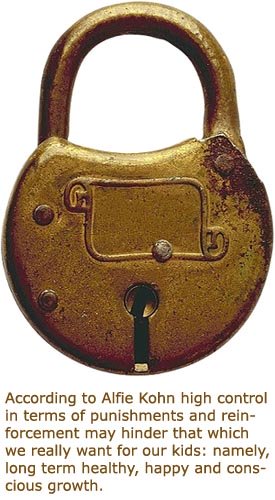 Alfie Kohn is radical in the sense that he thinks that control practiced in whatever shape or form possible is detrimental for children in the long run.

His thoughts are extremely provocative for many parents, but therefore also extremely interesting.

In Kohn's view high control such as requiring instant obedience, using punishments as well as reinforcements actually is a hindrance to the long-term goal that parents desire, namely allowing their kids to grow into happy, independent, conscious and caring adults.

In a powerful quote, Alfi Kohn says that traditional child discipline teaches our children to "jump through hoops for us to love them". Thought provoking, isn't it! And most likely true, too!

So as you can hear, I tend to agree with Alfie Kohn, and therefore am sceptical of Diana Baumrind's strong emphasis on the firm control.

My personal experience is crystal clear:

The lower my awareness level is (because I'm stressed, tired or because fear for some reason is dominating my thought pattern) the more external control I feel tempted to use because for some reason or other the 'power from within' is temporarily inaccessible.

The other way around, the higher my awareness level is (because I'm deeply present, am bonding, tuning in, not mentally blocked or rigid because of fear etc.) the less I need to use control means to handle my child.

This means that to me, the level of control used is dependent on both the parents' general level of awareness (high or low) and the state of consciousness of the particular moment (dependent on immediate context, mood etc.).

If you're interested in knowing more about what I mean by high level of consciousness, you might like to read this article on good parenting skills or this one on what makes a good parent.

If you want to explore Diana Baumrinds 3 parenting styles further, please dive in to the links below.

Back to the top of this page about Questioning the Authoritative Parenting Style: Modern Perspectives on Diana Baumrind's Beloved 'Firm Parental Control'